Līgo vakars is tomorrow and we've been patiently waiting for our kefir biezpiens to finish drying so we could make Jāņu siers (Latvian Solstice caraway cheese) today.

Making this type of fresh cooked cheese is a semi-involved process that takes about an hour of active cooking time. We made a small cheese this year since it's just the two of us but it's great for starting out too.

As far as biezpiens goes, I'm working on solidifying the process for making biezpiens from kefir and will test how to make it from buttermilk. For now, check out the comments on Gateway Cheese and read the Latvian pankūkas post for details on pressing kefir cheese to make a basic biezpiens.

So without further ado.. Let's begin! 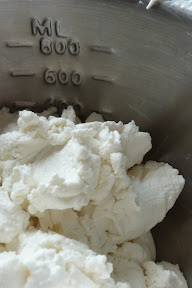 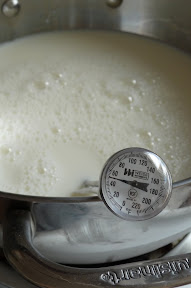 As the whey begins to clear, keep a close eye on things. It won't take long to go from mostly milk to mostly curds. 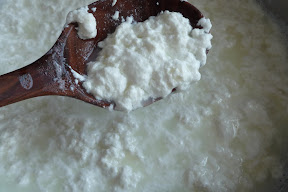 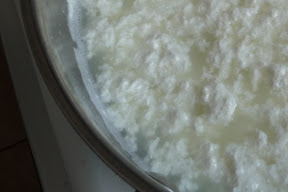 Once it's nicely separated, carefully lift out the curds with a slotted spoon into a cheesecloth-lined large colander set in a large bowl. Once you've removed most of the big curds, drain the bowl under the colander into a waiting storage pitcher for future use. Replace the bowl and carefully drain the remaining whey and curds into the colander. Drain the whey left in the bowl into your container. You can use this to make whey ricotta if you like or use it to add flavor in place of water. My husband loves to drink it cold!

You need to press out any remaining whey, so gather up the edges of the cloth and wind up the cloth to help squeeze out some whey. Don't be afraid to just grab on and squeeze too but be careful, it's hot!

Set the 8" deep skillet on medium-low heat and begin melting the butter.

In a small bowl, mix together the egg and egg yolk, along with caraway and salt to taste. You're looking for enough caraway to comfortably speckle the cheese which is probably a couple of tablespoons. Unwrap the cheese and add it, mixing it well with your hands. 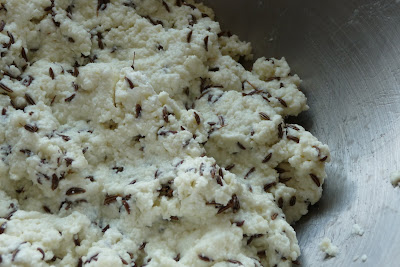 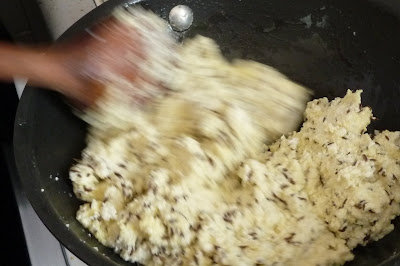 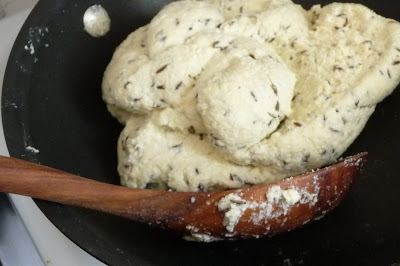 No, your arm won't fall off. 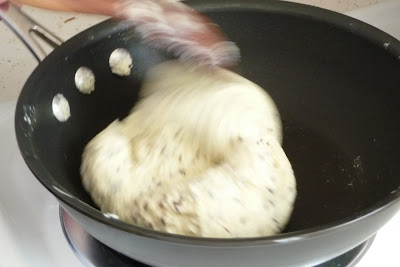 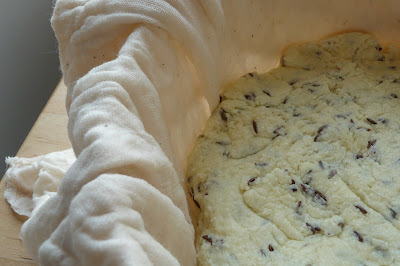 Fill it with something heavy. I used river rocks I bought at the local dollar store for a 50c a pound (there's about 6 lbs as shown). This will make your cheese harder. 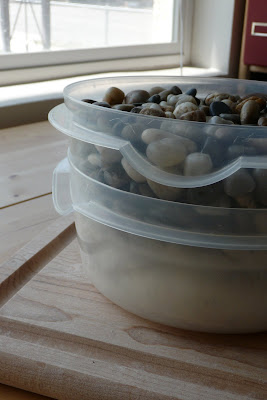 Leave it out on the counter for a while so it can cool down then you can put it in the fridge to finish. Once it's cooled and had a chance to start forming a hard rind, take it out of the mold, unwrap it, sprinkle some kosher salt all over the cheese and rewrap it before placing it back under the weights in the mold. Don't touch for at least a few hours!